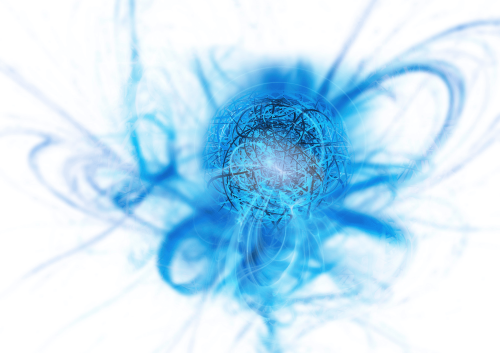 These elementary particles are so small that light waves are too big to touch them as they simply pass over them. Without the reflected light waves into our eyes, we are not able to see them. Electromagnetic waves with much shorter wavelengths are therefore created to attempt to see these tiny particles. But since these waves consist of much higher energy, they do not touch but hit these elementary particles off course. As such, by the time we see these particles, we are not able to capture their precise location and pathway of these particles, which created the Heisenberg Uncertainty Principle as the basis of all Quantum Physics.

To help in further understanding these elementary particles, a mathematical concept called the Point Particle is created. We can assume that a particle is a point in space, with a certain charge and mass, all indistinguishable from each other. This is to help Physicists define them and calculate all of their interactions.

But there is still one problem – gravity.

Gravity is a theory of geometry, the geometry of space and time with precise calculation of distances. But in the quantum world, we are not able to accurately measure things. How then do we marry the story of gravity with the story of quantum physics?

If we could marry gravity to quantum physics and the standard model, we would have the theory of everything.

Hence could there be a new narrative – what is more complex than a point? It is a line or a string! The String Theory is thus birthed!

String theory describes many different elementary particles as different modes of vibration of the string. What we perceive as particles are actually vibrations in loops of string, each other its own characteristic frequency. Like how a guitar string vibrating differently can give you a lot of different notes, a string can give you different particles, which includes gravity. String theory not only embraces gravity but requires it. The study of string theory has also led to the concept of supersymmetry.

String theory aims to unify all fundamental forces of the universe, which could possibly become the theory of everything. Yet much of the maths involving a consistent string theory does not work in our universe with its three spatial and one temporal dimensions. String theory requires ten dimensions to work out.

Ultimately string theory did not manage to reveal the nature of our universe, but the math in string theory still has a big impact on pure mathematics and cosmology for instance. String theory may point us in the right direction and is a precious tool for theoretical physicists to help discover new aspects of the quantum world.

Though string theory may not be the theory of everything, it may still be an extremely useful story. We still do not know the true nature of reality, but we will continue to explore different theories to find out.