Physics in the Bedroom 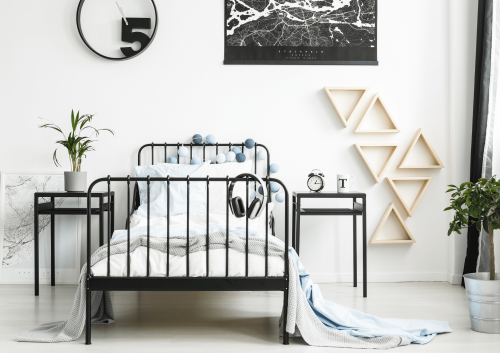 The ringing of your alarm clock helps you get up in the morning and get ready for school. Sound is something that we cannot see with our visible eyes but can be experienced. Sound waves travel from the alarm clock and works on the concept of Quantum Mechanics and Quantum Physics, which involves the origin, propagation and properties of sound as well as the definition of time.

Gravity helps you to write when using a ballpoint pen. As the pen moves across the paper, the ball at the tip of the ballpoint pen rolls as you push down to write on the piece of paper. There is ink inside the pen that sits on top of the ball. Gravity pulls the ink down towards the paper and the ball rolls in the ink as your write, allowing a controlled amount of ink to flow onto the paper as you write. If you remove the ball, gravity will pull all the ink down and form a puddle on the paper.

How do they work? The concepts of magnetism and sound waves are involved in the science of your earphones / headphones. When you plug the earphones into an electrical source, the magnet in the earphones create an electromagnetic field, which results in soundwaves.

Filament in an incandescent lightbulb causes the light bulb to glow when an electric current runs through it as the electric current heats up the thin filament. The higher the temperature, the more intense the glow, and the whiter the light that comes out.

For LED (light-emitting diode) lights, the recombination of electrons and electron holes in a semiconductor produce light through a process called electroluminescence. The wavelength of the light produced depends on the energy band gap of the semiconductors used.

The spring mattress on your bed consists of numerous spring coils. When a spring coil is compressed by your body weight, it exerts a force roughly equal to its change in length. This is known as Hooke’s Law in Physics. Hook’s Law states that the force with which the spring pushes back is linearly proportional to the distance from its equilibrium length (as long as the spring is not compressed beyond its elastic limit). This reaction from the coil is also known as a restoring force because when an applied force derived from a mass is exerted onto the spring, the spring pushes back in an attempt to restore itself to its natural position and equilibrium. A mattress with a good push-back or resistance when you lie on it is usually more comfortable.