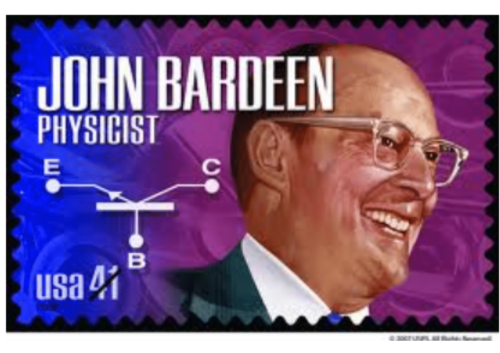 Born in May 1908, John Bardeen was an American engineer and physicist, and is the only person to be awarded the Nobel Prize in Physics twice! First in 1956 for the invention of the transistor and again in 1972 for a fundamental theory of conventional superconductivity known as the BCS (Bardeen-Cooper-Schrieffer) theory.

The transistor is a miniature electronic component made up of silicon (a chemical element found in sand) that can do two things – it can work either as an amplifier or a switch. As an amplifier, it takes in a tiny electric current and one end (input current) and produces a much bigger electric current (output current) at the other. Hence it functions like a current booster which can also be found in a hearing aid and a loudspeaker. As a switch, a tiny electric current flowing through one part of a transistor can make a much bigger current flow through another part of it, allowing the small current to switch to a larger one. This is how computer chips work to enable computers to store information and make decisions.

The invention of the transistor was a major game changer in the electronics industry to make it possible to develop many electronic devices that we are using today like our telephones and computers. This invention also ushered in the Information Age (also known as the Computer Age, Digital Age, or New Media Age) – a historical period in the mid-20th century characterized by a rapid transition from the traditional industry to an economy driven by information technology.

The BCS theory is the first microscopic theory of superconductivity since Heike Kamerlingh Onnes’s 1911 discovery. This theory describes superconductivity as a microscopic effect caused by a condensation of Cooper pairs (a Cooper pair or BCS pair is a pair of electrons or other fermions bound together at low temperatures in a certain matter). This theory is also used in nuclear physics to describe the pairing interaction between nucleons in an atomic nucleus and in nuclear magnetic resonance spectroscopy (NMR) and medical magnetic resonance imaging (MRI).

Bardeen received a PhD in Physics from Princeton University and after serving in World War II, he was a researcher at Bell Labs and became a professor at the University of Illinois. His main fields of research since 1945 have been electrical conduction in semiconductors and metals ad diffusion of atoms in solids. He passed away in 1991 at the age of 82.

“Science is a collaborative effort. The combined results of several people working together is often much more effective than could be that of an individual scientist working alone.” — John Bardeen

PrevPreviousHow to win a Nobel Prize in Physics?
NextChapter 1 – MeasurementsNext
CONTACT US