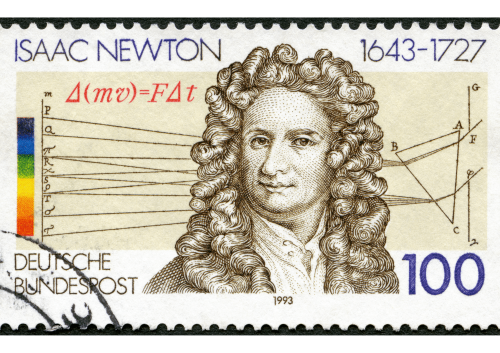 Isaac Newton is considered one of the most important scientists in history. Sometimes called the father of modern science, Newton revolutionized our understanding of our world. He was a man with accomplishments in several fields, including astronomy, Physics and Mathematics. He developed the theory of gravity, the laws of motion (which became the basis for Physics), a new type of mathematics called calculus, and made breakthroughs in the area of optics such as the telescope. [Baffling Physics of Everyday Things]

To understand more about Newton’s life, education, work and more, here are some interesting facts about this important figure.

He wasn’t expected to survive as a child.

Isaac Newton was born prematurely and was so small that people did not expect him to live. It is estimated that he may have been born up to 15 weeks early.

At least, not the way we know it. The story we know is that Newton was sitting under a tree contemplating life when an apple struck him on the head, simultaneously making a light bulb about gravity go off. The real story according to Newton was he was merely looking out the window when he

happened to see the fruit drop. Most historians believe that the story about an apple falling on Newton’s head is just folklore.

Newton had conflicts with many rivals

He and Robert Hooke, a scientist perhaps best known for his microscopic experiments, had a long-lasting grudge match. Hooke thought Newton’s theory of light was wrong and denounced the physicist’s work.

Newton also argued with German mathematician Gottfried Leibniz over who discovered infinitesimal calculus first. Leibniz claimed that Newton had stolen his ideas. It was later determined that the two mathematicians had probably made their discoveries independent of each other.

His lectures were poorly attended

Newton was a professor at Cambridge for nearly 30 years. However, he showed little interest in teaching, was known for a nasty attitude and his lectures were not popular. Often, no one showed up at all.

Newton became known for his eccentric behaviour in later life.

But it probably wasn’t his fault. Newton died in his sleep on March 20, 1727. After his death, it was found that his hair contained mercury, probably from his alchemical pursuits. His exposure to mercury poisoning may explain his eccentricity later in life.

PrevPreviousHow to decide if you need Physics Tuition?
NextPhysics in the BedroomNext